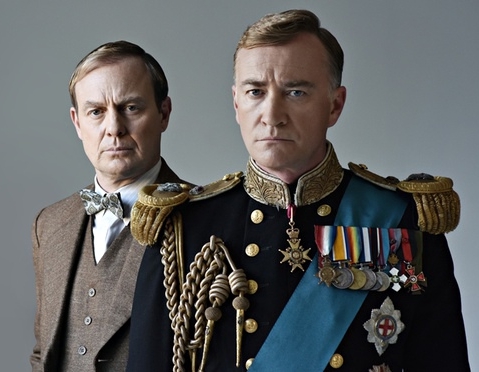 Any stage production of The King’s Speech is always going to have a lot to live up to. Although people shouldn’t necessarily make comparisons to the film, it is inevitable that they will. It is good to see that in this production, both Raymond Coulthard as King George VI and Jason Donovan as speech therapist Lionel Logue strive to make these characters and historical figures completely their own.

For Donovan, this is the best I have ever seen him on stage. His delivery is strong and punchy when needed and he commands the stage. During quiet, more intimate and revealing moments of the show, he holds the audience in the palm of his hand.
Coulthard also delivers, particularly in the second act, and his final speech is sensational. The two share a great rapport and are a complete joy to watch. They play the relationship between Bertie and Lionel to utter perfection.
It is unfair to say they are let down by the rest of the production because it is not bad, it’s just not great. Overall, The King’s Speech just doesn’t work all that well as a stage play. The scenes lend themselves to a much more visual recreation and it’s hard to imagine you’re at a fabulous party at Balmoral when there are only four people on stage.
The set design was clever, as were the scene changes but I found myself waiting for the scenes that were just Donovan and Coulthard together. Katy Stephens as Myrtle Logue did an average job, as did Claire Lams as Queen Elizabeth, but it is the two lead actors who drive the show. I found myself irritated at times by the rest of the supporting actors.
Overall, the play has a distinct air of mediocrity about it. Bravo, though, to Coulthard and Donovan who both turn in great performances.