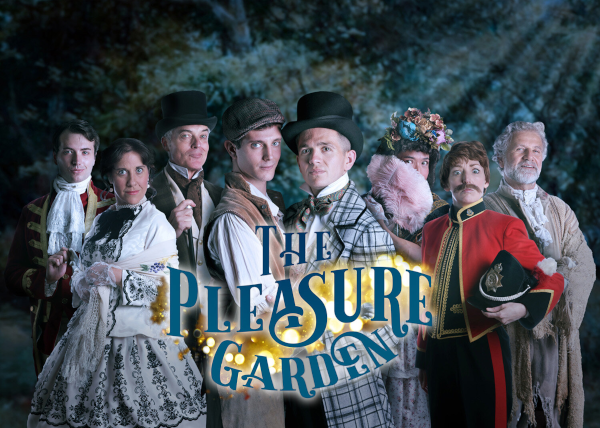 What a triumph! Sparkling, witty writing, memorable tunes and orchestration, nifty choreography, slick direction and outstanding performances. The Pleasure Garden imagines lives crossing in the 1850s, towards the end of the actual gardens’ history, suggesting much of the naughty goings-on but linking it to war and modern redevelopment in an intriguing story with an array of vibrant characters.

Glenn Chandler has written a show that kept me smiling throughout, marvelling at his audacious rhymes and unpredictable plotting. I thought I could guess where the show was going, but I was wrong – he takes it in many glorious, sometimes ridiculous directions. It’s frustrating that I don’t want to reveal too much: you need to see it yourself to soak up the joy of the surprises. Charles Miller has written beautiful melodies which encompass many styles. Aaron Clingham’s orchestration is impeccable, blending the instruments of the four musicians (himself, Jade Cuthbert, Becky Hughes, Pippa mason) delightfully. The sound balance is the best I’ve heard here, allowing me to enjoy every word in the songs and appreciate the soundscape behind. Thanks to Paul Gavin.

Fenton Gray’s direction basks in the shifts in time, playfully inhabiting the glorious set by David Shields. George Reeves’ video design adds more subtle visuals into the production. Choreography by Carole Todd has the cast burst into simple yet delicious routines in the relatively small space.

This is a top-class production and the cast are up to the challenge. Sam Baumal is an endearing innocent, Tom, courted by Jay Worley’s seemingly over ambitious Ralph. Entrancing to see their relationship develop. Rory-Charlie Campbell adds great louche comedy as Lord Roger. Ashleigh Harvey really impressed me with her voice and comedy timing. The remarkable Bea Amora Wong is Princess Saura, a visual and aural delight. Such delicacy. Jennie Jacobs impresses in a difficult role and grows stronger throughout the show. ”It’s Complicated” was my favourite song, and it certainly was complicated, brilliantly delivered by Saura and Antrobus. Steve Watts quietly filled a variety of roles, each swiftly and simply delineated, as well as his wise main creation, The Hermit. Credit to Jonathan Harlow understudying so many and still making his smaller characters individuals. And for Benjamin Wong’s glorious surprise: one of so many revelations.

This production is packed with quality in production values and performances. There is something to please everyone and the standing ovation at the end was absolutely well deserved. Take the chance to be tempted into these saucy assignations, go up in the balloon, flinch at the war. Just like The Vauxhall Pleasure gardens, this show has something for every taste and I guarantee you will not be disappointed. Glorious!