5
Fri, 8th Mar 19
Ian McKellen's one man show, seen in London on the set of "Home, I'm Darling".
Ian McKellen - Tolkien, Shakespeare, Others and You>> (tour) 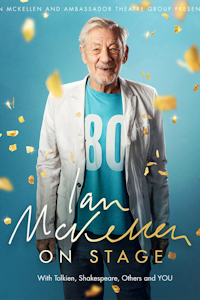 Ian McKellen said of this show "I'm celebrating my 80th birthday by touring a new solo show to theatres I know well and a few that I don't. The show starts with Gandalf and will probably end with an invitation to act with me on stage. In-between there will be anecdotes and acting." and that pretty well sums it up! Armed with nothing but a trunk of memories (to which he adds a sticker for each venue visited) and a prodigious memory, Sir Ian entertains and enthralls us for over 2 hours (overrunning on this, and probably every other, performance).

Sitting near the front, probably less that 12ft from Sir Ian, this was a truly special experience. In the first half he takes us through his career, from amateur actor, through the regions to major stage roles and on to filmswith one lucky audience member getting to go on stage with him and even handle Gandalf's sword (which he still has - together with the hat!). Aspects of his personal life, including his coming out, are also covered and the whole talk is littered with anecdotes of the people he has known and worked with and the places he has appeared. Apparently he left the National Theatre Company because he thought, with all the excellent actors in the company, he would not ever get a good part!

The second half is dedicated to Shakespeare with Sir Ian reciting from memory parts from many of the 37 plays and tol anecdotes about the ones he didn't know a speech from.

This really, really is a "do not miss" event, I'm so glad I didn't!

<< Back to NEWS
All news and reviews by Fran>>

World’s First COVID Safe Drive-Inside Theatre Venue Opens in Manchester
Creators of immersive musical theatre productions, Beyond Theatre, have created the world’s first Covid compliant drive inside theatre venue in Manchester.
Scenesaver
A website describing itself as a “Netflix” for performances in off WestEnd, Off Broadway and fringe theatres from all over the world.
Nationwide, volunteer-led, public campaign underway to support Britain’s imperilled performing arts industries
The Public Campaign for the Arts brings together people of all ages, all backgrounds and from all parts of the UK, to express the immense value of arts and culture in their lives, and to call on the government to rescue the cultural industries.
Winner of Theatre Book Prize 2020
Biography of Vivien Leigh wins STR Theatre Book Prize.
London Theatre Direct & Apple Wallet tickets
London Theatre Direct introduce Apple Wallet tickets in a West End first.
BoV - Change the Future
Bristol Old Vic launch a "give a gift in your will" campaign
Samuel French scripts on-line
Launching today, a new website for Samuel French Scripts.
Captioning Awareness Week
West End and other arts venues to take part in Captioning Awareness Week during November.
Pantomime Coins
Ultra-Rare Pantomime 50p coins to go into circulation this festive season.
New immersive captioning tech
New and easy to use immersive captioning technology is to be made freely available to UK theatre companies to boost their provision for deaf audiences.
SeatChoice theatre blog»
© Dynamic Listing Ltd, UK
1995-2020
PRIVACY and GDPR