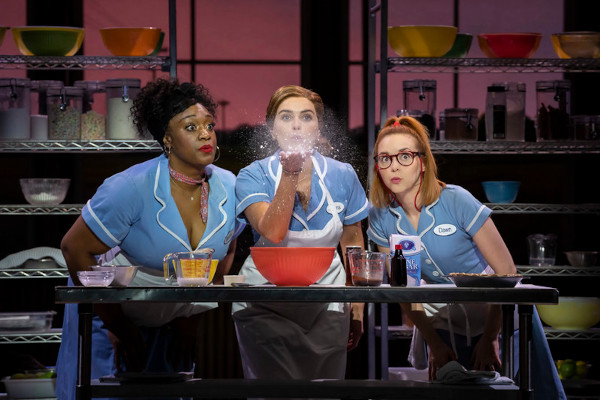 A genuinely entertaining evening but not, for me, "up there" as a truly great evening. The central three women, Sandra Marvin, Evelyn Hoskins and particularly Chelsea Halfpenny as Jenna, provide strong performances, driving the show onwards. Matt Jay-Williams is an entertaining Dr Pomatter and I felt a fondness for Michael Starke's Joe, particulary as he sang "Take It From An Old Man". The company all worked hard and the story is great - but somehow, for me, it just didn't gel.

I fear that my response is partly down to the terrible sound balance - not only is the sound very bright, at times even harsh, but the balance between the on stage band and the vocals is not right. For several of the songs, particularly the first and last, I captured only about one word in ten - I really have no idea what they were saying. Thinking this might be my old ears, I checked with audience members elsewhere in the auditorium and found that they had the same experience. A shame as the music is good, the ensemble work was really engaging, the versatile set was clever and some of the solo songs delightful. There is a real story here so not being able to follow all the songs, particularly if you haven't seen the show before, really detracts from the overall experience.

Am I glad I went? Yes, of course, as I said, it was an enjoyable evening, I just wish they'd sorted the sound out ...