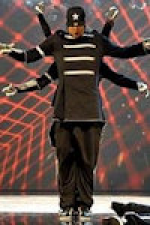 Find the best Diversity - Connected dance or ballet tickets at Bristol Hippodrome, Bristol. Formed in 2007, in memory of a dear friend, the dance troupe consists of eleven members from East London and the Essex area. Diversity are really one big family. They are made up of three sets of brothers: Ashley and Jordan Banjo, Ian, Jamie and Matthew McNaughton, Sam and Mitchell Craske. They are complemented by four of their best friends: Terry Smith, Ike Ezekwugo, Warren Russell and Perri Luc Kiely. This tour is set to be even bigger, and to take them into the new decade of Diversity, Ashley Banjo has created a new show, which centres around the world of social media, the internet, and the digital era we now live in, but more importantly how this connects us all.

Diversity - Connected tickets: The tabs above allow you to select between links to suppliers and date searching. Click on a supplier's logo to see their details and on the 'buy now' button to see and check the tickets on offer. Meal deals (tickets plus a meal) usually represent excellent value for money. Theatre breaks (tickets plus a hotel room) can provide considerable savings.

Overall: 1.20
Joyce Dixon (21May22): Sadly I agree with the above reviews. Since Diversity won BGT I have wanted to see them. I saw them at the Sage Gateshead and I was bitterly disappointed. We had fab seats however the lighting was so dim that you couldn't really see the dancing. Every now and again the lights would shine on them and I thought... Happy days... Here we go for it only to fall into darkened shadows again. However I had no problem seeing the huge neon boxes / massive screen. Music was bland and uninteresting. I waited all night for them to come on and do their famous robotic dance in their reflective suits but they didn't do it. Instead they wore street clothes throughout the show. I did not enjoy the political aspect of the show I didn't go there to be preached at. Don't mix politics with entertainment. I could not have been more disappointed, stick to what you do best. I will never go see them again. I was DEVASTATED!! 1
Sue (14May22): Have to agree with other reviews. Just seen the show at Cardiff Really disappointed in the amount of dancing through the whole show. Music unrecognisable and too loud. A lot of the audience were young children. They would not understand the theme of the show or the references to BLM etc. much to political. Please go back to what you are good at 1
Motherm (09May22): Saw diversity last night in Harrogate. Had no real expectations other than a couple hours of good dance and entertainment. First 15mins nearly left! Booming music, patronising teacher like presentation by Ashley Banjo to primary school children. Sadly the so called thread or message was so basic and simplistic it failed to make any " connection" to the dances routines which quickly became boring and monotonous in their repetitive moves. Mozart, Chaplin to out and out wet tshirts stripping and thrusting !! Total waste of money. We left at the end of first half!. Don't get me wrong their are some incredibly talented dancers but they need to acknowledge their limitations: no soap box, no preaching, no need for personal congratulation. Mix up the tempos, change the tone and different dance moves. Celebrate the strengths of the individual dancers. Would not repeat or recommend. 1
Stu (11Apr22): I agree with Tris above. Disappointed by the amount of dance held together with an over dependence on a bare threaded stroyline that massages egos. There was also one point when it felt a bit like Magic Mike at the end of the 1st act. I wouldn’t rush to watch the group again. 2
TRIS (09Apr22): A really frustrating and monotonous experience. Far too much time was spent by Ashley promoting and praising himself. At one point, both audience and cast were sat watching a video of Ashley receiving an award. The performances were sporadic. Whilst technically good, they didn’t hit their usual standards. The theme was an interesting one, but the messaging poor and the dances rarely related. Ironically, it all felt disconnected. To be honest, the second half of the show was unbelievably dull. Whilst I fully appreciate everything they have achieved, I have to say this is one to avoid. The reaction of others at the end was either frustration or boredom, although it was a small cross section of the 3/4 full theatre. Sadly, the very worst London show I have seen. 1