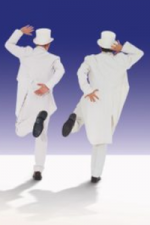 Find the best The Play What I Wrote play tickets at Chichester Festival Theatre, Chichester. You see, Hamish has written a play, an epic set in the French Revolution, called A Tight Squeeze for the Scarlet Pimple and he wants to see it mounted. Sean, on the other hand, wants them to continue with their double act, even though they haven't worked for two years. He believes that if they perform a tribute to Morecambe and Wise, Hamish's confidence will be restored and the double act will go on. But first, Sean needs to persuade a guest star to appear in the play what Hamish wrote... The Play What I Wrote website.

The Play What I Wrote tickets: The tabs above allow you to select between links to suppliers and date searching. Click on a supplier's logo to see their details and on the 'buy now' button to see and check the tickets on offer. Meal deals (tickets plus a meal) usually represent excellent value for money. Theatre breaks (tickets plus a hotel room) can provide considerable savings.
Information updated within the last 28 days

Overall: 5.00
Kevin Sermon (19Jan22): If you want a great evening, then this is it. Very funny, especially the sidekick Arthur, I had a fabulous belly laugh throughout the show. Many Eric and Ernie jokes, and mispronounced words and guest star name. Fabulous. 5