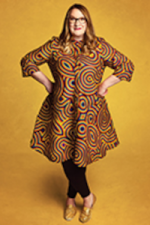 Information for Sarah Millican - Bobby Dazzler at Festival Theatre, Edinburgh (Comedy). Since winning the 2008 <strong>if.comedy Best Newcomer Award</strong> for her debut solo show Sarah Millican's Not Nice at the Edinburgh Fringe Festival, Sarah is fast on her way to becoming a household name. She has already notched up a number of appearances on top comedy shows including Mock the Week, Michael Mcintyre's Comedy Roadshow, Have I Got News For You, 8 Out of 10 Cats, Live at the Apollo and The Bubble. Sarah Millican - Bobby Dazzler website.