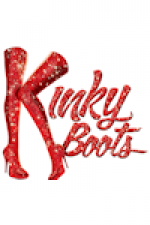 Find the best Kinky Boots musical tickets at Epsom Playhouse, Epsom. Inspired by a true story and based on the Miramax film written by Geoff Deane and Tim Firth, Kinky Boots tells the story of Charlie Price who has reluctantly inherited his father's Northampton shoe factory. Trying to live up to his father's legacy and save the family business from bankruptcy, Charlie finds inspiration in the form of Lola. A fabulous entertainer in need of some sturdy stilettos, Lola turns out to be the one person who can help Charlie become the man he's meant to be. As they work to turn the factory around, this unlikely pair finds that they have more in common than they ever dreamed possible... and discovers that when you change your mind, you can change the world.

Book by: Harvey Fierstein
Music: Cyndi Lauper
Lyrics: Cyndi Lauper (based on the motion picture of the same name)

Wednesday, 25th May 2022 to Saturday, 28th May 2022.
VENUE DETAILS: Epsom Playhouse
Scroll down for reviews, theatre information and other details.

Kinky Boots tickets: The tabs above allow you to select between links to suppliers and date searching. Click on a supplier's logo to see their details and on the 'buy now' button to see and check the tickets on offer. Meal deals (tickets plus a meal) usually represent excellent value for money. Theatre breaks (tickets plus a hotel room) can provide considerable savings.