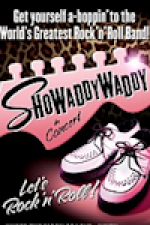 Find the best Showaddywaddy concert tickets at Leas Cliff Hall, Folkestone. Famous for their catchy pop versions of old ?50s US rock ?n roll songs as much as their flamboyant Teddy Boy look, dance routines and numerous television appearances, Showaddywaddy will take to the Pitlochry stage for the first time in what promises to be a finger clicking, side-stepping, rock ?n roll evening. From a catalogue of hits from over 30 years (their first single, Hey Rock ?n Roll was released in 1974), they perform timeless pop favourites such as Under The Moon of Love, Heartbeat and Blue Moon. Showaddywaddy website.

Showaddywaddy tickets: The tabs above allow you to select between links to suppliers and date searching. Click on a supplier's logo to see their details and on the 'buy now' button to see and check the tickets on offer. Meal deals (tickets plus a meal) usually represent excellent value for money. Theatre breaks (tickets plus a hotel room) can provide considerable savings.