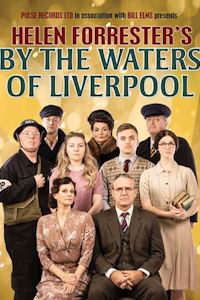 Information for By The Waters of Liverpool at Beck Theatre, Outer London (Play). Rob Fennah wrote both the stage play versions of Twopence To Cross The Mersey and By The Waters Of Liverpool. At seventeen, Helen had fought and won two bitter battles with her parents; the first to educate herself, the second for the right to go out to work. Her parents are as financially irresponsible as ever, wasting money while their children still lack adequate food and clothing. But for Helen, things are looking up as she begins to make new friends and develop some social life outside the home. In 1939, now aged 20 and with Britain on the brink of war, Helen has never been kissed by a man. That is until she meets a tall strong seaman, and falls in love.
Performers Mark Moraghan (John Forrester), Eric Potts (Mr Ellis), Lynn Francis (Deaconess), Danny O'Brien (Harry O'Dwyer), Chloe McDonald (Fiona), Rloy Carruthers (The Detective), Parry Glasspool, Lucy Dixon, Sian Reeves, Roy Carruthers.
Author Rob Fennah. Producer Pulse Records Ltd (in association with Bill Elms). Director Gareth Tudor Price.

London > Beck Theatre > By The Waters of Liverpool (tour)