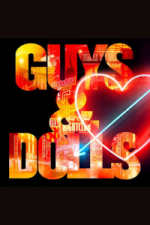 Find the best Guys and Dolls musical tickets at Bridge Theatre, Inner London. A musical fable of Broadway. Based on story and characters by Damon Runyon. Book written in 1950. A Salvation Army officer, Sister Sarah, attempts to save the souls of the New York gamblers. "Luck be a Lady", "I've Never Been in Love Before", "Sit Down, You're Rocking the Boat" Join us for Guys & Dolls as The Bridge transforms for one of the greatest musicals of all time. It has more hit songs, more laughs and more romance than any show ever written. The seating is wrapped around the action while the immersive tickets transport you to the streets of Manhattan and the bars of Havana in the unlikeliest of love stories.

Guys and Dolls tickets: The tabs above allow you to select between links to suppliers and date searching. Click on a supplier's logo to see their details and on the 'buy now' button to see and check the tickets on offer. Meal deals (tickets plus a meal) usually represent excellent value for money. Theatre breaks (tickets plus a hotel room) can provide considerable savings.
Information updated within the last 28 days