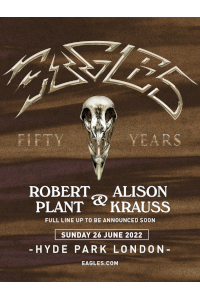 Find the best The Eagles - Fifty Years concert tickets at Hyde Park, Inner London. In 1971 the Eagles formed to create what has become one of the most successful bands of the 1970s. The America rock band is formed of Glenn Frey, Don Henley, Bernie Leadon and Randy Meisner.