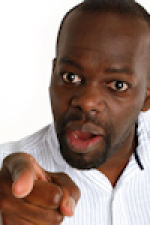 Information for Daliso Chaponda - Apocalypse Not Now at Town Hall, Loughborough (Comedy). His father's a politician, his brother's a doctor and Daliso Chaponda was destined to become a reverend. But he enjoys sinning too much. So the funnyman from Malawi became a comedian. Daliso is a versatile comedian equally comfortable talking politics, romance, filth or religion. As such, he has performed in churches, casinos, strip clubs and sports bars. Daliso has also had two plays produced and is an award winning author.