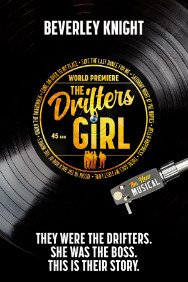 Information for The Drifters Girl at Theatre Royal, Newcastle upon Tyne (Musical). The Drifters, one of the world's greatest vocal groups, and the truth about the woman who made them. With an unbelievable soundtrack of some of the most iconic songs in history including Save the Last Dance for Me, Under the Boardwalk, Kissin' in the Back Row of the Movies, Stand by Me, Come on Over to My Place and Saturday Night at the Movies. World Premiere. The Queen of British Soul BEVERLEY KNIGHT stars as Faye Treadwell, the legendary manager of THE DRIFTERS, who, alongside her husband, fought for three decades to turn Atlantic Records' hottest vocal group into a global phenomenon.
Performers Beverley Knight (Faye Treadwell).
Book by Ed Curtis. Producer Michael Harrison. Producer David Ian. Director Jonathan Church. Design Anthony Ward. Choreographer Karen Bruce. Lighting Ben Cracknell. Music Chris Egan (music supervision/orchestration).