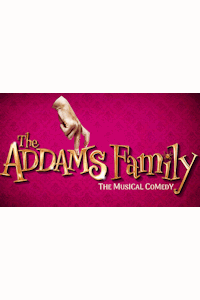 Information for The Addams Family at Theatre Royal, Nottingham (Musical). Musical comedy based upon The Addams Family characters created by Charles Addams in his single-panel gag cartoons, which depicted a ghoulish American family with an affinity for all things macabre (not so much based on the TV or Film franchises). Wednesday Addams, the ultimate princess of darkness, has grown up and fallen in love with a sweet, smart young man from a respectable family - a man her parents have never met. And if that weren't upsetting enough, Wednesday confides in her father and begs him not to tell her mother. Now, Gomez Addams must do something he's never done before - keep a secret from his beloved wife, Morticia. Everything will change for the whole family on the fateful night they host a dinner for Wednesday's 'normal' boyfriend and his parents.
Approximate runtime 122minutes (including any interval).
Music Andrew Lippa. Lyrics Andrew Lippa. Book by Marshall Brickman. Book by Rick Elice.. Producer Katy Lipson (for Aria Entertainment). Producer Music and Lyrics Limited. Director Matthew White. Choreographer Alistair David. Musical Director Andrew Milton. Director James Orange (casting director). Design Diego Pitarch. Design Ben Cracknell (LX designer). Sound Richard Brooker. Music Richard Beadle (musical supervisor/orchestration).

Tuesday, 18th May 2021 to Saturday, 22nd May 2021.
TOUR DETAILS: The Addams Family
Scroll down for reviews, theatre information and other details.