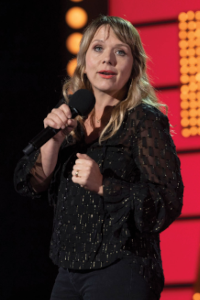 Find the best Kerry Godliman - Bosh comedy tickets at Quad Theatre, Plymouth. The charmingly straight-talking, quick-witted Kerry Godliman is one of the country's best performers. Both an incredibly talented comedian and a phenomenal actor, Kerry is best known for her appearances on BBC's Mock The Week, Live At The Apollo, Jack Dee's Referendum HelpDesk, Celebrity Pointless and Channel 4's 8 Out Of 10 Cats, Comedy Gala in aid of Great Ormond Street Hospital' and BBC's Celebrity Pointless. Kerry is also a regular on BBC Radio 4 with appearances on the esteemed The News Quiz, The Now Show and Just A Minute as well as her own series Kerry's List. No chance. Her bosh-like nature will never let her rest. Well, that and a needy cat, a constantly disappointing camper van, ever-raging feelings of mum guilt and bewilderment at the phasing out of thimbles. All will be explained. As seen on Mock The Week, Live At The Apollo, Taskmaster, Michael McIntyre's Big Show, Cats Does Countdown, After Life, Save Me and Call The Midwife and heard on The News Quiz, The Now Show and I'm Sorry I Haven't A Clue. Kerry Godliman - Bosh website.

Kerry Godliman - Bosh tickets: The tabs above allow you to select between links to suppliers and date searching. Click on a supplier's logo to see their details and on the 'buy now' button to see and check the tickets on offer. Meal deals (tickets plus a meal) usually represent excellent value for money. Theatre breaks (tickets plus a hotel room) can provide considerable savings.