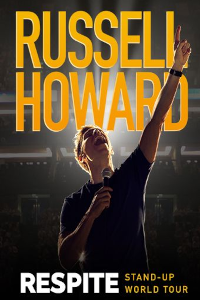 Star of BBC2's Mock the Week, host f his own BBC 6 Music radio show, and nominated for the Edinburgh Festival if.comeddie Award 2006, Russell Howard's infectious, charming and uniquely banter-filled style of stand-up has made him a red hot comedy property. He is quite literally the new golden boy of comedy and is hugely in demand wherever he goes. Following the record-breaking success of his 2017 tour Round The World, Russell Howard returns with his biggest globe-spanning stand-up tour to date. Hot on the heels of his critically-acclaimed hit Sky One show The Russell Howard Hour, and his global smash Netflix special Recalibrate, Russell is back on stage where he belongs, making sense of a world that's spinning out of control. It's time for Respite. Russell Howard - Respite website.

Between 6th February 2022 and 17th July 2022 this tour will visit 3 venues in Aberystwyth, Lincoln and Douglas. Current and future dates only. This production has been listed in 43 venues since 6th September 2019.

You can embed this tour information on your own website by adding a single line of code to a page and using the Qtix code T0848423784 - for details see our Embed Information page.