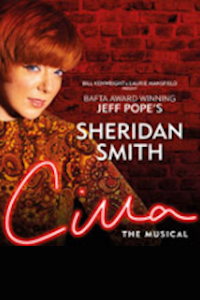 Cilla - The Musical, is a spectacular and heart-warming musical adaptation of the critically acclaimed ITV mini-series based on the early life of Cilla Black, by BAFTA award winner, Jeff Pope (The Moorside, Philomena, From The Cradle To The Grave, Mrs Biggs). The story follows the extraordinary life of the ordinary teenage girl from Liverpool, Priscilla White, and her rocky, yet incredible, rise to fame. By the age of just 25 she was recognized as international singing star Cilla Black. By the age of 30 she had become Britain's favourite television entertainer headlining series' of Blind Date, Surprise Surprise and many more.

Tour details for Cilla - The Musical 2020

Between 23rd September 2020 and 21st November 2020 this tour will visit 5 venues in Liverpool, Aylesbury, Edinburgh, Birmingham and Leeds. Current and future dates only.

You can embed this tour information on your own website by adding a single line of code to a page and using the Qtix code T01023865285 - for details see our Embed Information page.

Receive email notifications of changes to Cilla - The Musical.