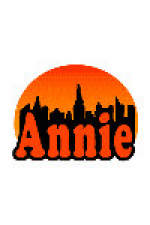 T882532652
Set in 1930s New York during The Great Depression, brave young Annie is forced to live a life of misery and torment at Miss Hannigan's orphanage. Determined to find her real parents, her luck changes when she is chosen to spend Christmas at the residence of famous billionaire, Oliver Warbucks. Spiteful Miss Hannigan has other ideas and hatches a plan to spoil Annie's search... Written in 1977 and based on the comic strip by Harold Gray.Archive :: production:T882532652, musical:S1403, venue:V478
Current production:Work

USER (01Dec04): Chris Moreno presents ‘Annie’ Book by Thomas Meehan, Music by Charles Strouse, Lyrics by Martin Charnin Alexandra Theatre, Birmingham, 30 November 2004 This latest touring version of the much-loved musical ‘Annie’ last seen a year ago arrived in Birmingham prior to its Christmas engagement at the Tameside Hippodrome, Ashton-under-Lyne. The local children from the Betty Fox Stage School clearly enjoyed every minute of the show and were a sparkling group and very popular with the audience. However, the sound was rather indistinct during the opening scene and occasionally at other times too for various members of the cast. The music was lively, well orchestrated, filling the entire theatre with all the much-loved numbers to the delight of the good-sized audience. Although director Chris Colby got from his cast a wonderful team effort and this really is one of those shows where everyone works, Act 1 appeared at times somewhat slow paced particularly when the dialogue did not keep the attention of the younger members of the audience. In comparison Act 2 was fast paced from the start and retained everyone’s attention right up to the rousing and well-received finale. The choreography by David Kort was ‘spot on’ making the production numbers big and the individual performances tight. The staging itself was bright, well decorated and captured nicely the opulence of New York society and the squalor and poverty of the orphanage and streets. At last night’s performance talented Stacey Hunt played the orphaned Annie with considerable stage presence and she had a strong singing voice too, which made her performance of ‘Tomorrow’ memorable. She was also a big hit with the audience. The ever-popular Su Pollard played the dreadful Miss Hannigan with great flare and a zany stage presence which her many fans clearly enjoyed. Su’s hairstyle and costumes were somewhat madcap bringing considerable individuality to the role, which she has now made her own. She was excellent in the production number ‘Easy Street’ after which you knew a sticky end was only a matter of time away! James Smillie gave all of his considerable stage experience to the role of Daddy Warbucks producing a powerful and animated performance throughout. He was excellent in ‘NYC’ and ‘I don’t need anything but you’ and built a good stage rapport with Annie. The role of Grace Farrell, Daddy Warbucks secretary was played with both charm and sophistication by Louise English. Her costumes and particularly that for the ballroom sequence were beautiful. Matthew Hewitt as Rooster Hannigan and Melody Jones as Lily St Regis were both well cast as the villains of the show and their performance of ‘Easy Street’ with Su Pollard was the highlight of Act 1. Christopher Marlowe was impressive in the character part of F.D.R. Danny the dog played by Sandy got plenty of reaction from the audience with a high ‘aah’ factor and many wishing they had such a well behaved pet at home. The show is sure to please and will no doubt do well at the Alex and continue to fill theatres throughout the country for many months to come. Clive Fuller