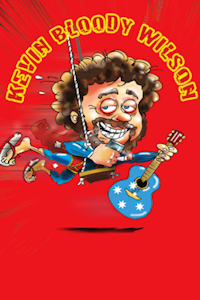 T0185210062
Despite being described as one of the funniest and most original singer/songwriters of our generation, there's a good chance you've never heard of Kevin 'Bloody' Wilson! His huge cult following in his native Australia would recommend that you be one of the first in the country to discover and rave about this unique comedian.Archive :: production:T0185210062, comedy:S0115949200, venue:V514