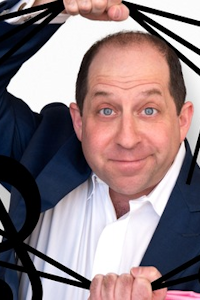 American TV regular and Broadway veteran, Jason Kravits, returns to Crazy Coqs for a star-studded, week-long residency, where he will yet again attempt the daringly impossible (or at least scarily inadvisable) in his critically acclaimed, jaw-dropping, completely improvised solo evening of music and comedy, Off The Top. The lights come up, the music starts, and Jason walks on stage with

Jason Kravits - Off The Top review
14Jan20: Seen at the Crazy Coqs.