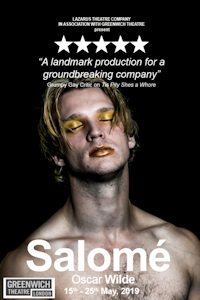 Scott Berg (19May19): Agree generally with this review. Good: Saw it last night, would recommend for a night out - price is right. A for effort, and concept. Some strong moments. But at times it felt like the actors were dragging a cart of flea market antiques up a hill. And to have all the overstated warning signs all over the theatre - WHY? We're adults. This seemed like an excellent university fringe production. *spoiler alert* Now, for the 'full male nudity' - if you're going to say it, DELIVER. This is problematic on two frontals: One, it's being marketed to be a tease and while the actor is beautiful and brave, and the actual scene quite appealing, -- c'mon: White Gym-Bunny Boxers? Then, an ill-fitting red robe donated by someone’s Gran? Second, is the actual, ya’ know - theme of the play. The entire fulcrum is the fact that the audience is lured by the beauty of Salomé, and when they get it, it's a mirror - a sad reckoning of watching something so alluring turn ugly from the inside, and you have to walk home wrestling with it. This happens, IF YOU DELIVER. The problem with the "Gender Fluid" quota crowd is, that they do concept kitsch very well, and it sounds great on social media. However the depth just gets lost. You might take some notes from 60s counter culturists and sexual liberators…you aren't the first to Free Willy on stage, despite the historical amnesia of today’s young audiences. ?? Do something with lighting, come up with a see-through G-string - anything - but to present a shameless character who's called for the severed head of a Holy Man and PROPHET, who’s been omnisciently the voice of God, Almighty throughout the first half, and then direct said character to shamefully cover himself - please, spare us the pollyanna highbrow conceptual excuses - either do it or just don't. ?? This is probably the first gender-switch-thing I’ve seen that actually is arguably workable, and a great idea & new twist, inside a work of a genius. It actually poves the prowess of Wilde and the point of fluidity in total. (He himself played Salome so technically this is not the first). So, with all the other bad gender farces we’ve suffered so far, for all that’s good and thespian, go there, we can handle it. These actors seemed ready to take the ride - if not, get some who will.?? Quibble: the music choices - sigh. The laugh wasn't worth throwing the mood. Again, the night was worth £15, there's some really really great moments, the Herod character comes alive, and the intellect of Wilde provides a piece so timeless and intelligent that it challenges anything in the West End or on TV for certain. ??It will be nice to see if directors like this mature into an ability of fulfilling the noise of these not-so-new, new concepts.
Local resident (16May19): Wilde's brilliant novel, Salome, has been seen as both a play and also as the brilliant opera by Ricard Strauss. This production with its gender switches was always going to have homoerotic overtones and could have been enticing. Sadly it was not. The actors, many of whom have good pedigrees, behaved like a sixth form play, declaiming loudly and consistently with no variation in their cadence and not appearing to listen to each other. There was very little difference in both pace and volume, which should be so much part of this story. The infamous dance for the king was about as far from erotic as could be imagined with a very beautiful Salome peeling off jewellery as if demonstrating on a shopping channel and dancing as if troubled with a flare of eczema. The king's rising excitement and flicking off the ejaculatory results were tacky and seemed unbelievable given the performance. A sadly unengaging result from wonderful source material.