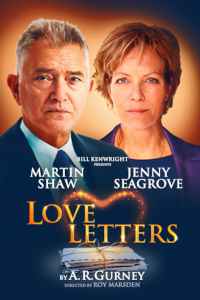 T0828626916
Andrew Makepeace Ladd III and Melissa Gardner's 50-year relationship is chronicled through their letters. From their first childhood Valentines to their final guilty goodbyes, through the letters the audience learns of Andrew and Melissa's lifelong hopes and dreams, their failures and triumphs, and ultimately, their love for one another. Love Letters was first performed in New York in 1989 by John Rubinstein and Kathleen Turner. Since then, it has attracted several all-star casts, including Paul Newman and his wife Joanne Woodward. Charlton Heston and Lydia Clarke Heston first performed the two-hander in 1997 during a brief British regional tour. The play is unusual in that it has no director and no designer and requires, literally, no rehearsal. During the performance, clocking in at just under two hours, the actors sit on the stage at a table and read directly from the assorted letters.Archive :: production:T0828626916, play:S4059, venue:V396