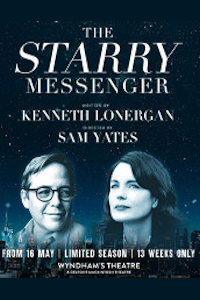 T1209660939
The humdrum life of astronomy lecturer Mark Williams takes an unexpected turn following a chance encounter in his weekly class at the planetarium. In The Starry Messenger , Kenneth Lonergan asks questions about life and death, friendship and marriage, and the Solar System in this funny and moving play. It was first performed in 2009 in New York starring Matthew Broderick.Archive :: production:T1209660939, play:S1697894341, venue:V421