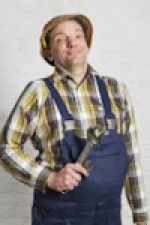 The German Comedy Ambassador is a fountain of knowledge; he knows there's no shortcut to success, hard work will eventually pay off and ?life' should mean life. Come along to this preview of Henning's new Edinburgh Show... or else. Deutschland ?ber alles! Henning has recently presented ?Henning Knows Best' on BBC Radio 2 and a 40 date sell-out tour of ?No Surrender'. In April, he appeared on ?The Matt Lucas Awards' BBC1 and filmed ?Eurogedden' for transmission prior to Euro 2012. Other recent appearances on TV include ?QI' BBC2 and ?Dave's One Night Stand' and on radio BBC Radio 4's ?The Unbelievable Truth', 'The News Quiz' and ?Now Show' and BBC Radio 5 ?7 Day Sunday' and ?Fighting Talk.'