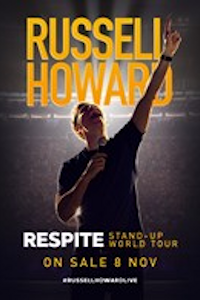 T0848423784
Star of BBC2's Mock the Week, host f his own BBC 6 Music radio show, and nominated for the Edinburgh Festival if.comeddie Award 2006, Russell Howard's infectious, charming and uniquely banter-filled style of stand-up has made him a red hot comedy property. He is quite literally the new golden boy of comedy and is hugely in demand wherever he goes.Archive :: production:T0848423784, comedy:S1677425825, venue:V1986850853
Current production:Tour/Production

Following the record-breaking success of his 2017 tour Round The World, Russell Howard returns with his biggest globe-spanning stand-up tour to date. Hot on the heels of his critically-acclaimed hit Sky One show The Russell Howard Hour, and his global smash Netflix special Recalibrate, Russell is back on stage where he belongs, making sense of a world that's spinning out of control. It's time for Respite. SSE Hydro