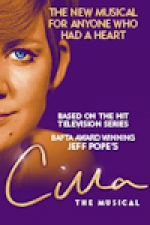 T784806644
Cilla - The Musical, is a spectacular and heart-warming musical adaptation of the critically acclaimed ITV mini-series based on the early life of Cilla Black, by BAFTA award winner, Jeff Pope (The Moorside, Philomena, From The Cradle To The Grave, Mrs Biggs). The story follows the extraordinary life of the ordinary teenage girl from Liverpool, Priscilla White, and her rocky, yet incredible, rise to fame. By the age of just 25 she was recognized as international singing star Cilla Black. By the age of 30 she had become Britain's favourite television entertainer headlining series' of Blind Date, Surprise Surprise and many more.Archive :: production:T784806644, musical:S632574367, venue:V1196088186

The musical score will be the ultimate soundtrack to the 60's including Cilla's greatest hits Anyone Who Had a Heart, Alfie and Something Tells Me, alongside a backdrop of the legendary "Liverpool Sound" including the Beatles' Twist and Shout, and American influences like California Dreamin by The Mamas and The Papas and many more.