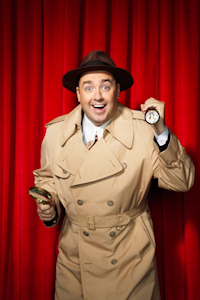 T01401895727
Curtains is a spoof murder mystery set in Boston, Massachusetts, during the late 1950s. The helter-skelter plot follows the story of an ill-fated theatre company whose inordinately untalented leading lady is murdered during the curtain call at the opening night of the production of a new musical Robbin’ Hood of the Old West. A police detective, who happens to be a musical theatre fanatic, arrives to take charge - can Lieutenant Cioffi solve the case, save the show, win the girl and also escape with his life. Curtains was the last musical written by Kander and Ebb. Their skilful and tuneful score includes the beautiful and moving "I Miss the Music", sung by a lonely composer when his writing partner has left him, which is made even more poignant by the fact that Fred Ebb died during the final stages of production, leaving John Kander to complete the project alone.Archive :: production:T01401895727, musical:S1474626065, venue:V490