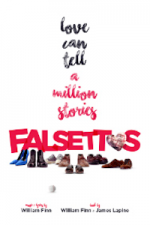 T184804794
Falsettos is unique - a musical comedy dealing with important contemporary issues such as identity, relationships, sexuality, religion and AIDS. The story concerns Marvin, a successful Jewish New Yorker, his wife Trina and young son Jason. Marvin, who like everyone else in New York, is in therapy, discovers, with the help of his analyst Mendel, that he is gay. His mid-life crisis manifests itself in a relationship with his young, handsome squash partner, Whizzer. No sooner is Marvin out of the door than Mendel proposes to and eventually marries Trina. Just when Marvin thinks life can t get any better, Whizzer dumps him and he s left all alone. However, in the second act, (two years later), Whizzer turns up at Jason s baseball match and, of course, in true musical tradition, he and Marvin fall madly in love once more. However, the happiness doesn t last for long and Whizzer falls ill and is hospitalised. Although it is never articulated, we know his terrible condition is AIDS. We leave Marvin sitting by his bed contemplating whether or not he will succumb to the terrible infection himself.Archive :: production:T184804794, musical:S1009511497, venue:V806511856

This is a special charity gala performance of Falsettos supporting the Make A Difference Trust, raising funds for HIV/AIDS projects that build awareness, and provide care, support and education in the UK and Sub-Sharan Africa. The evening will begin with drinks and canap