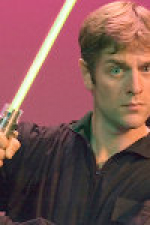 T868979806
Canadian actor Charles Ross spent much of his childhood in a galaxy far, far away, watching Star Wars videos over - and over - and over again. The result of this misspent youth is his hilarious show, One-Man Star Wars Trilogy, where he single-handedly plays all the characters, sings the music, flies the ships, fights the battles and condenses the plots into just sixty minutes! One-Man Star Wars Trilogy, written by Ross and directed by TJ Dawe, made its UK debut at the Edinburgh Festival Fringe in August 2006, where every night sold out. Since then, Ross has toured the world with the show, performing it over 1,200 times in more than 180 cities across four continents. It has been enjoyed successful off-Broadway and West End runs, been the highlight of official Star Wars Celebration events, entertained muddy festival goers at Glastonbury, sold out a return visit to the Edinburgh Fringe and appeared at numerous theatres around the globe, as far afield as Dubai and Sydney.Archive :: production:T868979806, one person show:S2136780581, venue:V803084951