She Knows you know! 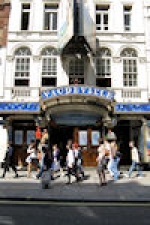 T1306539400
The life and times of Hylda Baker. Hylda Baker was a pioneer of female stand-up comedy for 60 years. The tiny Lancashire comedienne learnt her trade in the music hall and became a legend in her own lifetime as a fast-talking, dominant busy-body with her tall, sullen sidekick Cynthia. She coined catchphrases which are still used today, such as 'you big girl's blouse', 'have you been?' and 'be soooon, I said, be sooooon'. In 1968 Hylda was given the part for which she is most remembered, as Nellie Pledge in TV's Nearest and Dearest, the joint owner of a pickle factory, starring alongside Jimmy Jewel as her brother Eli. She also gained considerable praise as an actress in films including Up the Junction and Saturday Night and Sunday Morning. Hylda died in 1986 aged 81. She Knows You Know has been a major success both in the West End and across the country and was nominated for an Olivier award for 'Best Entertainment' in 1997.Archive :: production:T1306539400, one person show:S1834, venue:V417