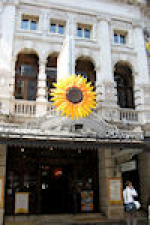 T0319651203
The Greeks have entered Troy in the Wooden Horse, razed the city to the ground and killed most of Queen Hecuba's family. Now she mourns, wondering what catastrophe will strike her next. So she sends her son Polydorus into the safekeeping of the King of Thrace and guards her daughter Polyxena tightly. But then the ghost of the Greek hero Achilles rises from the grave and demands the death of Polyxena as a sacrifice to the Gods so that the winds will die down and allow the Greek fleet to return home. The great Greek tragedian Euripides wrote Hecuba in Athens in about 424BC at a point where he was becoming increasingly disillusioned with the futility of war. It remains one of the greatest anti-war plays of all time, a thrilling and emotional cry of fury against treachery and greed.Archive :: production:T0319651203, play:S2104604935, venue:V380