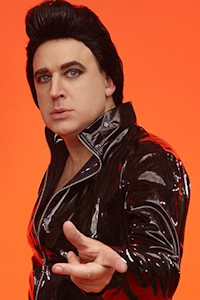 There are more punchlines in a Tim Vine show than any other you'll have seen. Fact. It's wonderfully silly and inane - but incredibly funny. Feel the electricity as Plastic Elvis hits the stage backed by his incredible five piece The High Noon Band. He'll shake, he'll smoulder, he'll try and control his hair and in the end he'll break your heart. Sing along with some of the King's greatest songs, on a breathless night of rock 'n'roll Tim Vine - Plastic Elvis website.
Age Advisory: 12+

Between 9th February 2022 and 5th March 2022 this tour will visit 6 venues in Southend-on-Sea, Westcliff-on-Sea, St Albans, Swansea, Crawley and Doncaster. Current and future dates only. This production has been listed in 33 venues since 2nd May 2020.

You can embed this tour information on your own website by adding a single line of code to a page and using the Qtix code T0920316212 - for details see our Embed Information page.

Overall: 1.57
Roland Butter (18Dec21): Initially we thought the warm up performers were parodies, albeit poor ones. Then the penny dropped. Still, we persevered & decided to see if Tim could rescue the initial car crash. Big mistake, he actually put his foot on the accelerator. Gave him 20 mins then snuck off. Still can’t believe how bad it was. Such a shame, been looking forward to it since June 2020. He’s fine himself no favours with this one. He would have failed a Stars In Their Eyes audition. 1
MattK (18Dec21): We got as far as Apollo Bar, started reading reviews and that this was not a comedy show but a Elvis tribute show.. drank out drinks and left, didn’t even sit down.. 1
Janet S (18Dec21): We loved the show, having previously seen You Tube videos, knew what to expect. He is an Elvis fan and this was his tribute. Good time. 4
Jack D (17Dec21): Real disappointment. Not a Tim Vine show! 1
Courtney (17Dec21): Well… where do I start? Is it possible to leave a 0* review? The only comedy was the hilarity of the support acts and buddy holly’s wig. I have never ran to an exit sign so quickly in my life. I will never get that half an hour of my life back. So utterly appalling I’d rather catch covid than suffer another minute. 1
Unknown (29Oct21):

Shit show not gunna lie. Since when does a elvis impersonator be worse than that. Waste of 25 cucking quid

1
Lucy B (29Oct21): Absolutely awful. I have seen better acts at a working men’s club for free and they were bad! Sadly an ego trip for Tim Vine who is obviously an Elvis fan but really should not be stealing our money by putting on such a god awful show. So many people walked out half way through. I would prefer to have been sat on my sofa watching tv. Excruciatingly bad! 1
G.Adams (19Oct21): Very poor warm up Act, Tim not what expected no one liners. Many of the Audience openly left during the Show. 2
Martin (19Oct21): In my opinion truely awful. Not even funny. Support acts were poor pub acts at best. Tim was even worse. He wasn't even a good Elvis impersonator. Smacks of a self indulgent ego trip for him. Stick to your brilliant comedy. People were walking out, as did we! Very sad. 1
Melvyn (19Oct21): Terrible. Expected usual one=liners but instead got a very poor Elvis tribute act 1
unknown (19Oct21):

.People throwing themselves off the balcony. Even Shane Richie wa ...

2
Stephen Hill (19Oct21): Dissopointed expect Tim Vine got poor Elvis should have reaad small print tickets booked 2 years ago Tim owes us a Tour as Tim Vine not plastic but gold 3
John sibo (19Oct21): Saw the Tim Vine plastic Elvis at the Alexandra in Birmingham very poor left before the end still trying to workout what I saw!! 1
Unknown (18Oct21):

.The band were great, backing singer incredible.The rest was awful