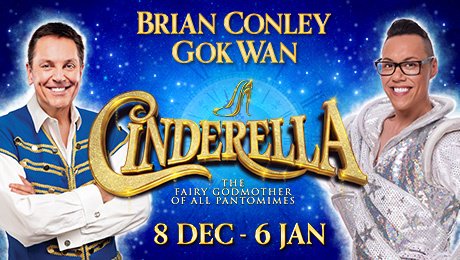 Brian Conley (Buttons) and Gok Wan (The Fairy Gokmother)  heading up the Bristol Hippodrome's spectacular Christmas Show. This is a real specatcle, loud, funny, great fun and full on - sets are brilliant, costumes fabulous, some clever transformation and otehr tricks and all the performances top notch. Plenty of humour for the kids and adults(!) and the cast seemed to be enjoying it as much as the audience without resorting to in-jokes so it felt like a real communal experience. I can't remember laughing so much at a panto in years.

Watch out for the dancers from The Bristol School of Dance - no mere decoration, they have a real part to play and they do it magnificently. Rare to see such young ones bring so much commitment and style to their performances. The ensemble also do a great job, sometimes in the most bizarre costumes (really, believe me!) though the men need to watch their hands when in hold, those loose fingers and raised thumbs would give Craig Revel Horwood a fit - we're all judges now thanks to Strictly!

The ugly sisters, Tess and Claudia played by Ben Stock and Neal Wright bring a sense of real panto. Outrageous costumes, of course, and well styled patter allow them to be loved and hated by the audience in equal measure - delightful. Lauren Hall manages to make her Cinderella hold her own and hold the stage when she needs to, difficult in the face of the force that is Brian Conley. She has a lovely voice and great timing, keeping things moving along when required and letting the laughs flow when things got crazy (oh yes they did!).

Dandini and the Prince (Matthew Malthouse and Scott Mobley) have precious little chance to shine but carry off their parts well. It seemed odd to open the panto with a song from the Prince as it slowed the start and meant it took a little time to get going but it soon became clear that the story was to play second fiddle to the comedy - more of a variety show with story bolt on than the traditional panto story with a variety bolt on. The loss of Baron Hardup and the Dame also meant that the story could be cut down and sped through but meant that the plot was carried by fewer characters and hence with less variation. I also missed the "its behind you" and "oh yes it is/no it isn't" moments but I guess these are the plaintive moans of an old school panto person as the audience simply lapped it up and, to be honest, so did I!

Highlights? The coach and horses just before the interval, best I've ever seen, and Brian with the kids on stage - he is a master of this sort of interaction and had fun with the kids without making fun of them.

A great family Christmas show, hugely enjoyable and genuinely delightful ... I missed a few bits of real panto but heh, the genre moves forward, the theatre was packed, everyone had a great time and the kids will remember the experience and hopefully become the theatregoers of the future. As Brian so deftly put it, "that's the magic of panto" so go grab yourself a bit of magic.