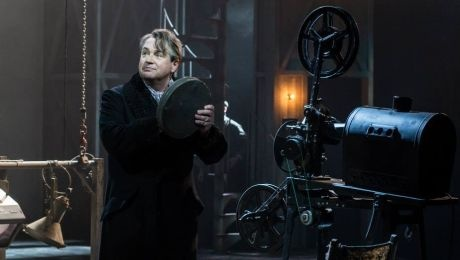 I last saw Mack and Mabel around 20 years ago and always rememberd it as a good show so was happy to find myself off to see this Chichester Festival Theatre production even if it was the last night in the home theatre.

Mack and Mabel is the story of Mack Sennett and his tumultuous love affair with the actress Mabel Normand, who he discovered and made a star. Set against the changing world of early Hollywood the story is one of love, ambition, loss, anger management (or lack of it!) and decline.

Sennett, of course, was responsible for bringing us many of the two-reel comedies that people of my generation grew up with at  Saturday morning pictures or on TV on a wet saturday afternoon. Funny, almsot plot-less, pie-fighting, car-chasing comedies that knew nothing of health and safety nor political correctness but went straight for the slapstick funny bone.

The main difficulty with the show for me is one of structure - we see the story unfold in a series of narrated flashbacks from Sennett which are interleaved with spectacular musical numbers based on his films. But these interruptions, and the large number of set changes, break the story flow, especially in the second half where they actually seem to dominate. I can't help thinking that some restructuring could bring the story back to the fore rather than leaving it a poor backdrop for some great numbers (Bathing Beauties and Kestone Cops in particular) - despite the quality of them I also felt that some of the set designs simply got in the way of the pace of the piece; set changes can kill pace especially in black-out. 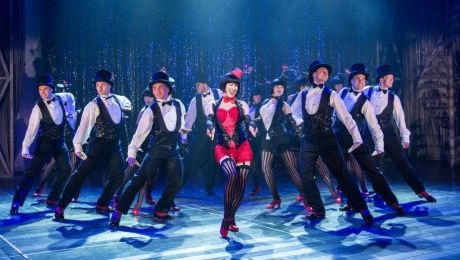 Michael Ball gives us an excellent Sennett, running as he does through a broad range of emotions, its a great part for a skilled perfomer and Michael is completely credible throughout, managing to handle the rather odd, freeze-and-aside moments without losing pace or place. Anna-Jane Casey as the loyal Lottie, is the outstanding female performance for me and her grand tap number a real highlight of the show.

A talented cast and production team try to bring this oddly shaped musical under control and largely succeed but some creative thought in the production planning might have made their lives a little easier ;-)