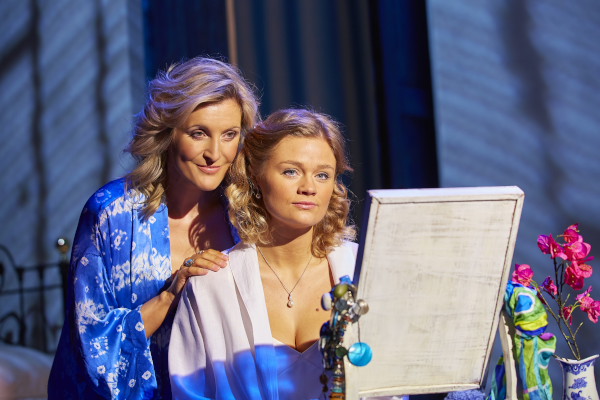 What a great evening! I mean, with music by Abba and a cast with more energy than an atomic power station what else would you expect and certainly the audience expected nothing less and were not disappointed.

For some reason, I found this stage version (how can I have gone all these years without ever seeing it before!) way more convincing than the film, which never really grabbed me, so I approached the evening with some doubts. SImple staging, powerful vocal performances and energetic dance routines simply drove out any and all doubts and swept me along with the rest of the audience. The opening scene with the bridesmaids perhaps jarred a little, very angular and shouty, but it quickly settled and the rest of the show was a delight.

Lucy May Barker played a credible Sophie and James Willoughby Moore was a delightful Pepper (what a dance!) but for me the real delight was Donna and the Dynamos - I would happily have listened to an evening's concert by these three - Sara Poyzer, Nicky Swift and Helen Anker out sang many an Abba tribute acts have seen as well as providing a strong central core to the acting.

More than just a jukebox musical, it is amazing how few changes are required to Abba songs to create a genuine narrative arc through the show - often simple changes in the emphasis of lyrics are enough to allow them to carry the story and they never need to be simply "tacked on" for effect.

A great evening, from an enthusiastic cast ... book tickets, go on, you know you want to!