The Addams Family in the UK - Updated

Amateur licence released for the UK. 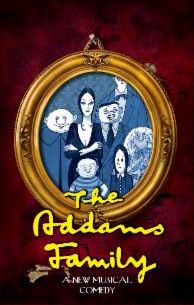 The Broadway musical based on the original Addams Family cartoons by  Charles Addams, is shortly to be hitting the UK. Thye first productions will be by amateur companies and it is thought that over 100 licences have already been applied for. A West End and UK touring production is still planned with dates currently unknown.

In the stage musical Wednesday Addams, the ultimate princess of darkness, has grown up and fallen in love with a sweet, smart young man from a respectable family - a man her parents have never met. And if that weren't upsetting enough, Wednesday confides in her father and begs him not to tell her mother. Now, Gomez Addams must do something he's never done before - keep a secret from his beloved wife, Morticia. Everything will change for the whole family on the fateful night they host a dinner for Wednesday's 'normal' boyfriend and his parents.

5
13th Nov 20 :: Review: What a Carve Up
Streamed performance by Henry Filloux-Bennett, based on the book by Jonathan Coe.
4
4th Nov 20 :: New Server
UKTW is moving to a new server.