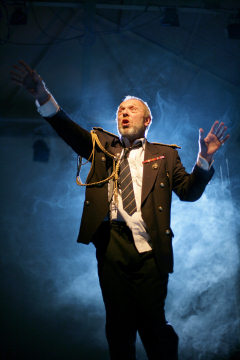 T1116372543
King Lear divides his Kingdom between his daughters according to a declaration of their love for him. His eldest Goneril and Regan exaggerate their affection and inherit. His youngest daughter Cordelia speaks only the truth and is banished. So begins the tragedy of King Lear, whose dignity, sanity and finally life are torn from him by a self-seeking younger generation, ambitious for his power. What is love, what is madness, what is truth - Shakespeare explores these questions together with many others in King Lear, widely considered to be his greatest tragedy.Archive :: production:T1116372543, play:S0555289637, venue:V1095
Current production:Work