A Spoonful of Sherman

5
Robert J Sherman at the St James Theatre
By Orlando
A Spoonful of Sherman (The Other Palace, Inner London)>> 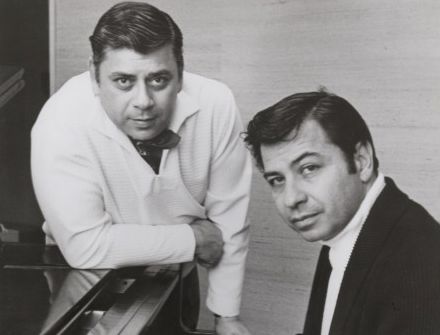 The sons of Russian Jewish immigrants, Robert and Richard Sherman began writing in 1951 after being challenged to do so by their Tin Pan Alley songwriting father, Al Sherman. Today, the grandson of that dream-filled immigrant regaled the packed-to-the-gunnels studio at St James Theatre. Robert J Sherman, grandson, son, nephew and accomplished composer and songwriter in his own right, deftly and with time-pressured brevity coupled with a peppering of emotional affection, took us through the Sherman Years with, of course, a major block being the Disney period where their first work under commission at Disney was The Strumming Song, 1961; known by the family as the Poppins Years, where the Brothers scored their masterpiece Mary Poppins in 1965. Further outstanding works include Chitty Chitty Bang Bang, Aristocats, Bedknobs and Broomsticks, Snoopy and Little Nemo… to name but a few. A dynasty was born in 1951, maintained through tumultuous and changing times of the twentieth century and sustained by the quality of the work thereafter with the vision of the subsequent generation.

A quality quartet of West End stars under the brilliant musical direction of Colin Billing enthralled a captivated audience for just under two hours with a desert island selection of the major works, along with a tantalising toe-in the-water with some lesser-known works, cleverly teasing us into heading off into the rain and searching iTunes for newly heard songs, or remembered ones…

Magically arranged, by Colin Billing, for the four stunning voices of the assembled songsters. Greg Castiglioni who brought the house down with his version of Smorgasbord and Charlotte Wakefield who’s Mary Poppins sprang up now and again to amuse proceedings with her clipped and beautifully intrusive ‘…of course you can say it backwards’. The ever-brilliant Stuart Matthew Price ‘popped it up’ a little with You’re Sixteen (admitting he had never heard of it before!), slipping beautifully into Doll on a Music Box / Truly Scrumptious with the orchestral operatic tones Emma Williams - who stared in the original Palladium production of Chitty Chitty Bang Bang.

Riffs and mash-ups on Winnie The Pooh, Chitty Chitty Bang Bang, Mary Poppins and a smashing Al Sherman Medley made the evening all too short, all too few songs, all the more memorable. I feel privileged to have been there. I truly scrumptious smorgasbord of smash hits by the Sherman Brothers.

In this Age of Not Believing I can only hope to see this show again - A Man Has Dreams, y’know… Forgive me, but it really was supercalifragilisticexpialidocious!

<< Back to NEWS
All news and reviews by Orlando>>