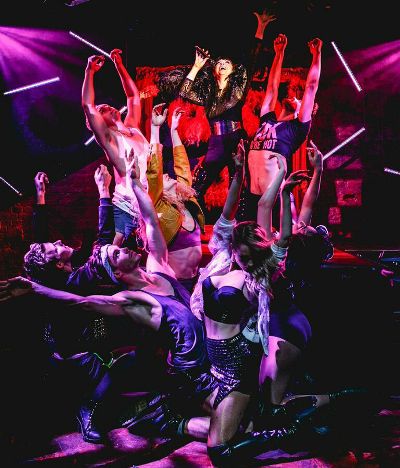 A fabulous production! You will love it or hate it. Gene David Kirk (Director), Philip Joel (Choreographer) and the cast have presented a vibrant version of a mundane book by Jonathan Harvey. The story is a predictable, an ageing gay man’s fantasy, reminiscent of Channel 4’s Cucumber but without Russell T Davies’ quirky twists and humour. The Pet Shop Boys music is pleasant but uninspiring; some songs slow the action and made me think “Why didn’t they just do this as dialogue?” (Pet Shop fans will adore it, however.)

The cast transform this into an exciting evening. High energy, acting off line and commitment to the show keep the audience engaged. The director fills the stage from the beginning with the cast gyrating as the audience enter. The ensemble songs are packed with interest. Philip Joel’s choreography refers to various styles which the cast perform with enthusiasm and power. Sad to think these moves are now history, but inspiring to be taken back to that era.

The two songs by Billie and Straight Dave in the second half which are backed simply by piano are the most effective, partly because the singers are not fighting the clictrack. It’s a problem throughout as actors try to project against the music. If they had had mikes, the blend would have been easier.

Katie Mellor as Billie Tricks commands the stage from the outset. She has a difficult task as host opening the show demanding “Do you know who I am?” when none of us do. She remains a tawdry constant through the show offering a cynical yet sympathetic contrast to the youngsters entering her world.

Jared Thompson makes us care deeply for Straight Dave, even though we can guess from the outset that he won’t live up to his nickname. His journey is a key element and the audience enjoy Jared’s interpretation of his struggle. His lament at the end of the show is particularly moving.

Shell (Amy Matthews) delivers most of the emotive drive for the show. Her discovery of her father and their relationship is entrancing. Her trauma over her boyfriend’s sexuality is tenderly delivered.

Connor Brabyn quietly develops Mile End Lee from straight wide boy into gay chancer. He deftly moves from menace to tenderness. He has a striking voice – it is a pity that he doesn’t get more to sing.

Ken Christiansen as Bob is another character who has issues. As the villain of the piece, he convinces us of the nasty underworld beneath the pop exploitation of the time.

Ben Kavanagh has one of the most interesting journeys. His timing and reactions offer welcome comic relief in the second half. A delightful performance.

Craig Berry as Vic makes a gentle start but rises to a powerful focus in the second half. When he went for the big notes, it was impressive. Though the writing could be more nuanced, he convinces us of the father’s mixed emotions.

The club performers put everything into their work. Elle Mitchell, Tamsin Blake and Grace Reynolds make the most of their all too short feature in Caligula, but this show was never going to focus on the girls. They work selflessly with Martin Harding, Ben Somerside, Jamie Firth and Alex Tranter to give cohesion to the club scenes and the linking numbers for the show. Brilliant work by all, making each character an individual. I was challenged to try to catch all they were doing on set as each was worth watching but I couldn’t move my eyes fast enough to keep up.

Beautiful people presenting hokum with panache. What more can you ask? A musical which has flaws, but a production which rises above them to deliver a delightful evening’s entertainment.