5
Touring production seen in Bristol.
By Becky
Heathers - The Musical>> 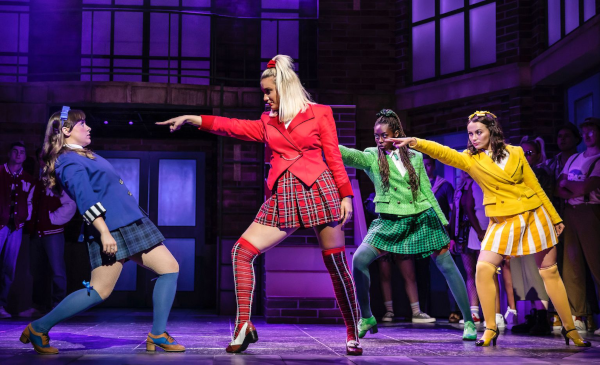 Fans of the cult classic 80s movie Heathers were out in force last night, but you don’t need to remember the original film to love Heathers The Musical. It’s a darkly funny show that is fast paced, shocking and weirdly feel-good from the off.

The show focuses on Veronica, a high school student who longs to be popular with ‘the Heathers,’ a trio of girls who all share the same name. Veronica’s talent for forgery earns her the popularity she craves, as well as the attentions of J.D. Dean, a new student who makes his affections towards Veronica very clear. It’s an angst-ridden teenage romance; brooding, intense and more than a bit unhealthy, especially when J.D. starts killing people and making Veronica forge their suicide notes.

Like I said, Heathers is very dark. But also filled with lots of very funny lighter moments, and the cast all played their roles exceptionally well. Maddison Firth, as Heather Chandler (or head Heather), has a natural gift for comedy, and her timing was absolutely spot on. Rebecca Wickes and Simon Gordon, as Veronica and J.D, respectively, played out a believable teenage romance. We’ve all been there… though maybe without the murders. Really, though, each and every cast member deserves praise for what they brought to the show. The energy never dropped, every song and dance was on point, and the audience loved it. Heathers is slick, imaginative, hugely enjoyable and a must- see.