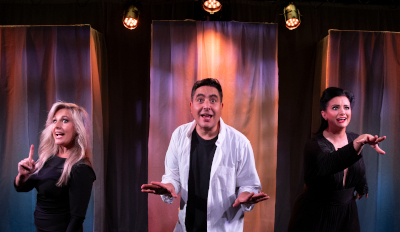 They make a tentative start in “Starting Here, Starting Now”, but the stars grow in confidence as the 75 min show progresses. Maltby & Shire’s musical revue shows its vintage – as Gina Murray comments, it’s very middle class, with numerous wistful songs of regret. Selected from Matlby and Shire’s catalogue of songs from their various early musicals, each song is delicately crafted, showcasing the versatility and charisma of its performer. I was hungry for something vicious or ecstatic to add flavour to the evening.

The show features West End stars Nikki Bentley (Elphaba in ‘Wicked’), Gina Murray (Donna in Mamma Mia!’) and Noel Sullivan (Dewey Finn in ‘School of Rock’) each enjoying their return to performance after lockdown. The sound is not perfect in this small venue, but when the stars go for it, their quality shines through. Gina Murray impressed me with her wry delivery of Sunday Times Crossword. Nikki Bentley revels in the dejection of What About Today. Noel Sullivan brings flair to Flair and I Don’t remember Christmas, working hard to bring comedy to the sadness. MD Inga Davis-Rutter speeds the production along, handling the keyboard deftly and happy to be included in the make-believe. Their socially distanced choreography is precise, if a little unexciting. It is simply staged and costumed. They made me smile with the big glitter number towards the end: never be afraid to echo A Chorus Line.

One Step was probably my favourite number as the three performers take turns to shine. They work in pairs and as a trio, but they are undoubtedly best in their solo songs.

This is a small-scale show with a big heart, and well worth the trip to Waterloo East.

UK TW say that "Lipstick On Your Collar" is on for Aug. 2921 - they are wrong/ - it has been rescheduled for 2-22! Ed: Thank you, we have updated according to the new dates in the Box Office.

This show is actually CODA - a Tribute to Led Zeppelin and is now on Sunday 13th March 2022. See you there! ED: Thank you! I have updated the information