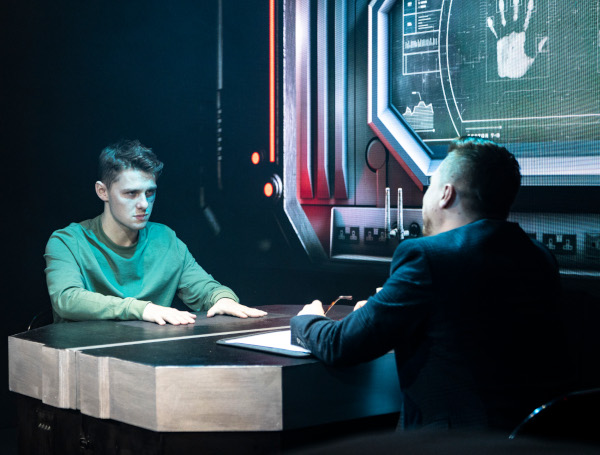 Ben Kavanagh’s The Convert is a chilling, mesmerising and remarkable story that shares and exposes the horrors of conversion therapy in the 21st century. In less capable hands, it could have been just that – a horror story - but thanks to the deftness and intelligence of Gene David Kirk’s direction, we are given a complex and layered love story with the undeniable terror of conversion therapy as its beating heart.

The three actors – Nick Mower as Alix, Sam Goodchild as Marcus and Ben Kavanagh as The Arbiter – give beautifully crafted performances that both thrill and upset in equal measures. Nick Mower gives a sublimely intimate and heartbreakingly vulnerable portrayal of Alix. Sam Goodchild perfectly characterises Marcus’ journey from resolute acceptance of his fate to optimistic hope, whilst Ben Kavanagh delivers a beautifully ‘evil with ennui’ Arbiter.

Credit must also be given to the team that helped create this dystopian universe. David Shields’ stark but innovative set, Joseph Ed Thomas’ lighting plot and the exceptional use of video, designed by George Reeve.

The Convert is an important story that needs to be told. Thanks to the exceptional artistry of everyone involved with this production, it is alarmingly and exquisitely brought to life and thrust, unapologetically, in the face of its audience.

<< Back to NEWS
All news and reviews by Daryl>>