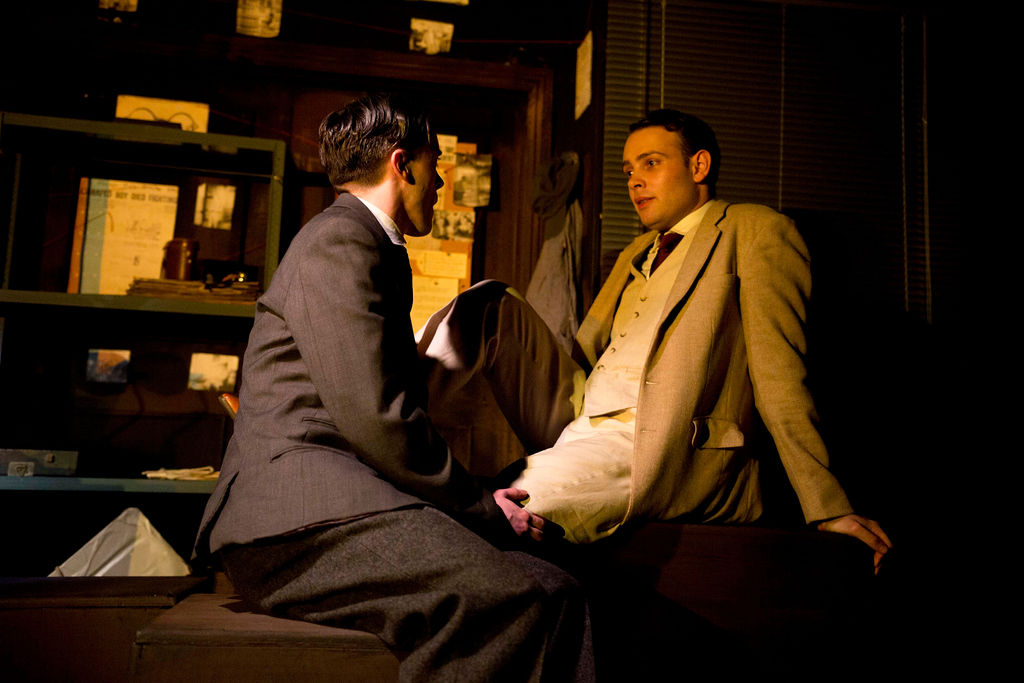 This true crime story has Nathan narrate his relationship with Richard to his prison parole board for a final time. Their obsession – Richard with crime and his superiority; Nathan with Richard- led them to murder, then a prison cell.

Bart Lambert as Nathan Leopold subtly shows us the old man and the young as the story moves from his parole board back to the events a lifetime before. He speaks and walks slower in jail, before shrugging off his prison self to become the younger, infatuated boy. He uses an intriguing accent and presents his passion for Richard through doleful eyes of adoration. He delivers the songs strongly. He alone makes the show worth seeing.

As Richard Loeb, Jack Reitman hits the mark in making his character’s feeling of superiority unattractive. I wondered why Nathan would worship him so, yet accepted the power struggle. Well played.

The lighting, by Chris McDonnel, is inventive: flickers to suggest candles and add tension; a car conjured with two lights. Rachel Ryan’s set is simple with the performers moving a group of boxes to suggest changes of place. These changes are swiftly and economically done, so avoid annoyance. Costume was simple yet appropriate and changes were effectively managed by the actors. Labels on props and the slow building of Nathan’s shelves of souvenirs hint towards the outcome of the story.

Tim Shaw drives the show from the piano in the centre of the set, yet never intrudes to pull focus. On our night, sound effects merged with reality outside the theatre, but this simply anchored the feel of the city.

Matthew Parker makes excellent use of the small space at The Hope Theatre. Every corner is included to carry the action out to the audience. The production has good pace. The story is told effectively with just two characters on stage and some voices off. I enjoyed their fixation with Nietzsche. Their pronunciation as Nitchy was amusing, as if to belittle their understanding of his thoughts. The actors were not afraid to be intimate, singing into each other’s face, but that is all we see of their partnership. I am not sure if Stephen Dolginoff has added much to the story by writing it as a musical. The songs are well delivered but are not that exciting. I would have liked more insight into the characters, especially Richard’s twisted mind.