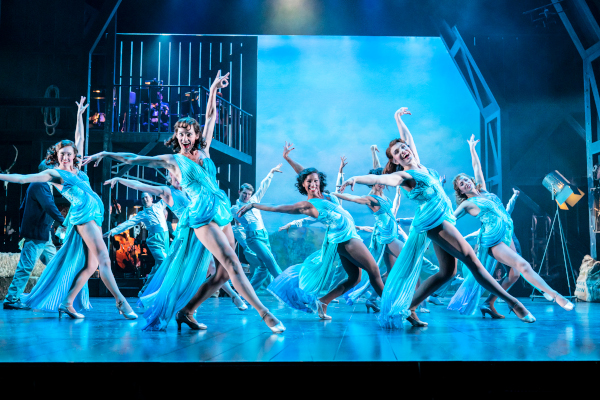 Take some of the most memorable musical songs (Sisters, Blue Skies and of course White Christmas), mix in some impressive choreography, top with glitzy costumes and you have the recipe for an evening of escapism; just what’s needed as the nights draw in after nearly two years of pandemic pandemonium!

White Christmas is a story familiar to many for the 1954 film starring Bing Crosby and Danny Kaye. Following the post war careers of Broadway entertainer Bob Wallace (Matthew Jeans) and Phil Davis (Dan Burton) as they join forces with The Haynes Sisters to put on a Christmas Eve spectacular in the hope of reviving the fortunes of the Pine Tree Inn in Vermont.

In this production Jeans and Burton don’t quite capture a genuine sense of camaraderie between the two ex-army pals, but their combined voices create some winning harmonies from the outset. And there is no doubting their musical theatre heritage. Dan Burton reprising his role as Davis is the more charismatic performer on stage – with great expression and physicality. Jeans (as Bob Wallace) less believable and his opening rendition of White Christmas for the troops rather disappointing.

As Betty Haynes, Jessica Daley delivers a great performance and her delivery of Love You Didn’t Do Right By Me was her highlight, with the choreography and staging closely echoing the original film. While Sally Ann Triplett, who has recently replaced Sheila Ferguson in the role of Martha Watson (the hapless receptionist at Pine Tree Inn) is outstanding in the role; excellent comedy timing, super delivery and a powerful voice which eclipsed some of the other performers. And congratulations to Ella Kemp in her professional debut as Susan Waverly.

The chorus worked hard to re-create a Broadway musical feel with great energy and musicality. Together with the lead performers this made for an enjoyable and colourful evening. So, while it might be a little early to think of Christmas, an evening of song and dance could certainly get you in the mood.

Note: In keeping with the winter theme of this production the auditorium of the Bristol Hippodrome was very cold so take a scarf.